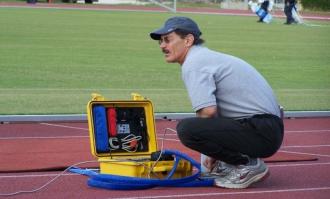 Since it's founding in 1984 Granite State Race Services has sought out and used the latest in timing technology. The personal computer revolutionized how races are timed starting in the mid 1980s. Results could be tabulated as fast as we could type the finishing bib numbers into the computer.  In 1999 we became the first timing company in New England to begin using a chip technology called ChampionChip, which made it possible to handle races with thousands of runners with far fewer errors, not to mention much faster, and freed up the runners to exit the finish area without having to wait in long lines. One drawback to this new chip technology was having to deal with hundreds of thousands of non-disposable plastic chips that were tied into shoe laces. They were expensive and the cost of lost chips was born by the runners and sometimes the races themselves. We dreamed of the day when chips would be disposable, and those dreams were answered by a company called ChronoTrack. In 2008 GSRS was once again the first in New England to use the new chip technology, and our partnership with ChronoTrack continues to this day.

The most recent developements in technology affecting the race timing scene is the proliferation of online registration systems that are linked to timing systems, enabling live results onsite and nearly instant email or text results sent directly to runners devices.